This is one of my favourite computers. I own four of them in various states of repair. So I decided to do a rebuild to make a really nice one that works. This page will be updated until the project is working. Last change was

12th July 2017 I have taken the capacitors out of the linear power supply of the machine I plan to refurbish and have been carefully powering them up on the bench. There are three:

They seem to be in good condition despite not being used for 25 years, which is just as well as new ones are now very expensive. 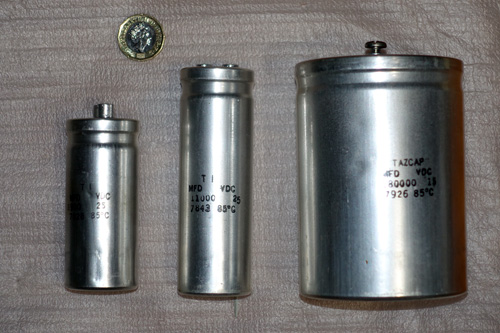 13th July 2017 Returned the large capacitors, removed all cards, disk drives and add on bits and given the machine a basic clean with compressed air and a wash down. The unit has a new style 'Horizon 8/16' label and had a TurboDos startup disk in the drive - however its going to be a CP/M machine. There was some yellow contamination on the front panel, from the days when people smoked in offices. 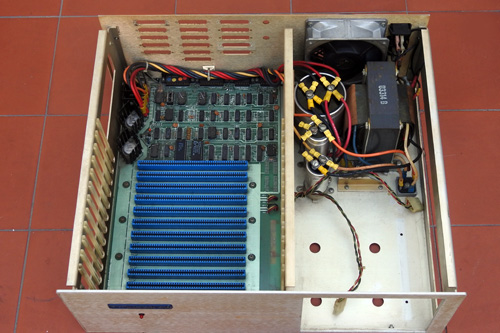 14th July 2017 Time to tread boldly and apply the power. First I double checked the wiring was correct and had a meter ready to measure the voltages on the capacitors. Power applied and there was a flash and a bang ! Quickly powered off. 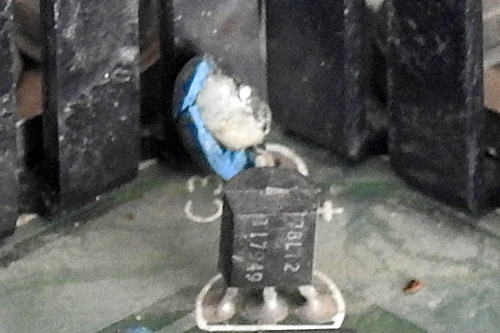 I sort of expected one of the tantalum capacitors to blow, and one obliged C3 6.8uf which is on the +16v rail which provides the +12v power.
Problem is the motherboard has to come right out to change it.
Just as well as there was a lot of dirt under it and its been cleaned. After all this is a restoration, not a repair, it will be 'good as new'.

The Northstar motherboard differs from the usual S100 backplane as it comes with two serial ports, a parallel port and a real time clock onboard. Plus the floppy power supply and some exploding tantalum capacitors. 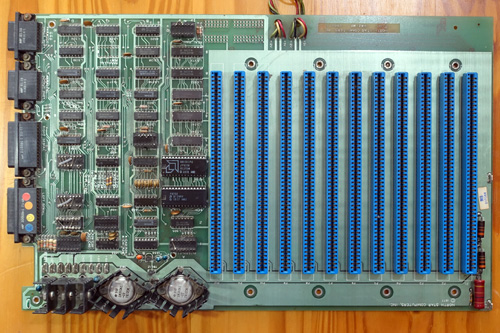 However, its not an essental component so I powered up the system again to measure the voltages, at which point the smaller of the large electrolytic capacitors failed, overheated and vented its electrolyte in my face. Just as well I wear glasses. So now I need an 8900uf can capacitor.
This provides power for the -16v rail so not related to the other failure.
Oh well, nobody said it would be easy.

I found a suitable capacitor in my junk box, but its a lot taller. Sourcing an exact replacement is difficult, I can buy them at a reasonable price from the USA but the postage cost is $44 In the end have bought two from Turkey for $8 off ebay Ireland.

This is becoming a multinational project.

15th July 2017 Measured the voltage on the rail that blew the capacitor and checked the rectifier. In the process noted the polarity was reversed. Well it is the -16v rail ... oh dear ... the black wire goes to the + terminal and the orange wire to the negative one. It was reconnected reversed which accounts for the demise of what was probably a good capacitor. Anyway one from the junk box is fitted, the main board repaired with a 10uf electolytic rated at 63v, a new fan fitted, a yellow crimp connector replaced and powering on gives a red front panel LED and nothing nasty happens. 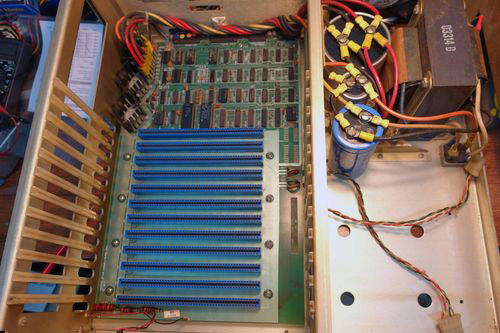 16th July 2017 Got some boards out, found the card extender and tried them out one at a time. A number of tantalum capacitors went bang, two went up in flames. one replaced and three working boards cleaned. The disk controller smelt stange so washed it in alcohol to remove the residue from a smoker, probably long dead.

Still concerned about the overvoltage on the power rails, I got out a second machine and checked the voltages on that, which were the same. Also C3 blew on the second backplane.

So, time to try the original machine, with a CPU, RAM64, a disk controller and a rather dirty Tandon drive, one of the original NorthStar drives, containing a Turbodos boot disk. It booted and the memory error light went out, which is a good sign. Reset and it booted again. Next I need a terminal working, and a front panel label. 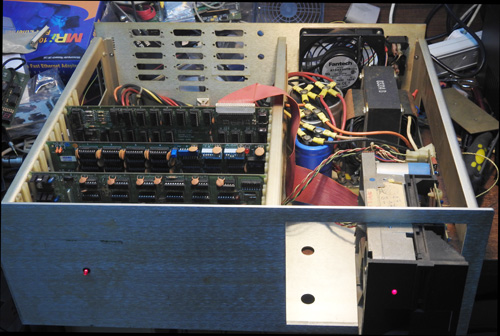 17th July 2017 Today we have the good news and the bad news, firstly the WY-30 terminal and keyboard works and does not go bang. Looping back the transmit and receive data it is sending and receiving and the cable is good. Just 2,3,7 and 20 straight through. Although there is a voltage on the transmit pin from the Horizon there is nothing seen on the screen with various boot disks. Although the drive is a bit suspect it does make the right noises. So tomorrow I need to get the scope out and check some clocks. 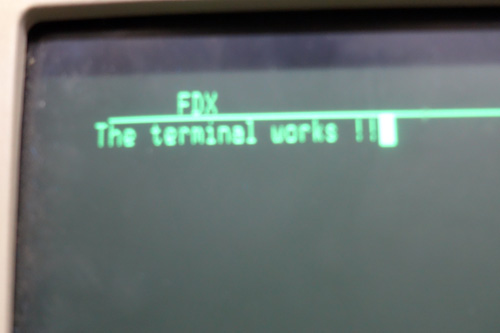 The system now boots. The problem would seem to have been the disk controller which worked initially but died quietly.. Tried five further ones (I have stocks) two didn't work one had an exploding cap and two are OK. The machine now boots into HDOS and CP/M.

The disk controller has holes for card ears so have fitted them as it makes removal really easy. Changed a 470pf capacitor which looked damaged and will check the heatsinks on the 7805 regulators for thermal compound. Otherwise good to go. 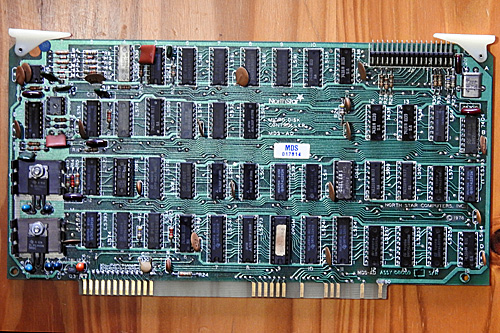 Cleaned up a few things and refitted the wood lid which improves cooling.

Fitted the Hard sector board which allows the use of standard PC disks on the Northstar. Originally NorthStar designed the system to use 10 hard sectored disks which are no longer manufactured. The board simulates the extra holes. Successfully formated a standard PC disk and made it bootable - which is a pretty good test. 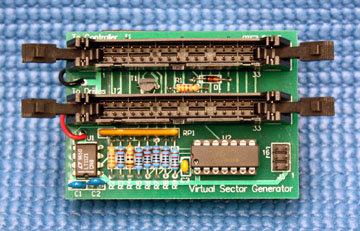 I am unhappy with the heat dissapation on the 7805 regulators. Although the design voltage for the machine is 8v the rail actually runs at 12v.

Given that the boards are now somewhat irreplacable, they should run at a sensible temperature and not be cooked.

Disconnecting the logic power rail and running it from my bench supply at 8v the machine boots and runs, and although the 7805's are warm they are not going over 50 C which is the 'too hot to touch' point.

The bench supply also has a current meter so have taken measurements of power usage of the various parts.

I think the way forward is to replace the original transformer with a new one which will produce lower - correct - voltages. Measuring the voltage drop betweeen the 8v rail capacitor and the last card slot on the backplane with all three cards running, is only 0.05v 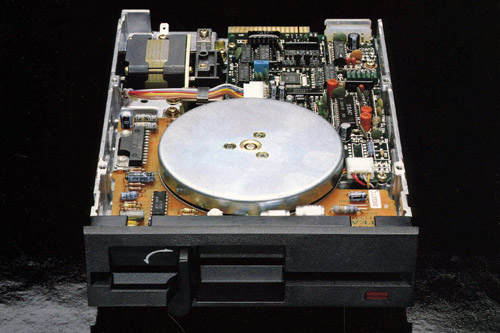 I found a couple of Teac FD55F drives in my store and cleaned them up, they worked but gave read errors and I could not format side two of the disks. After some extended testing replaced the Horizon controller card, they now work, and have created a boot disk. The disks are not backward compatible with the Tandon TM100 drive for various reasons and some of the disks had defects anway. Regretably this particular disk controller card can't be fitted with ears.

Will try and repair the other one when the machine is finished. The scope is required for that. Probably just a duff TTL chip. Have ordered the replacement transformer.

I found a 3.5 inch Miniscribe drive in an old PC clone, this is a 20Mb MFM drive, which should be large enough for my purposes, its also economical on power consumption drawing under 1a on the 12v and 0.6a at 5v. After a little encouragment the drive starts and makes normal drive noises. However in order to do a low level format I need to machine to run for an extended period so will wait for the new transformer to be in place before proceeding. 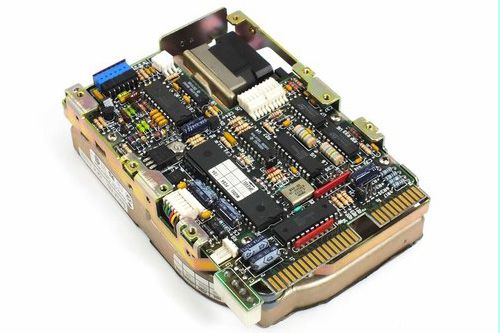 The new transformer is installed and everything works, the voltages are now 8.5v 17.5v and -17.5v and the regulators run at a sensible temperature.

The next thing is to sort out the diskette system. 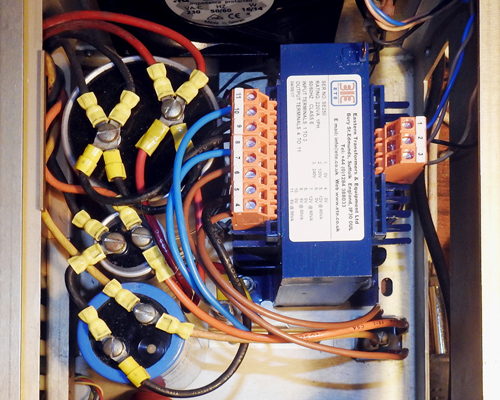 After a lot of research into the Teac drives, I have given up on them and found a pair of 2S2D 40 track Epson drives in another machine which are in good condition and cleaned them up. Meantime the 10,000uf capacitors arrived from Turkey and fit perfectly. If you are looking for odd parts check out Alperdem highly recommended.

The drives work but the memory card has a problem. I found another three of them in a box (I have spares) One went bang, one was dead, and the third one seems to work. The idea is once I have a 100% working machine is to repair the defective cards, soak test them and flog them on e-bay as working.

The project continues in 2018.